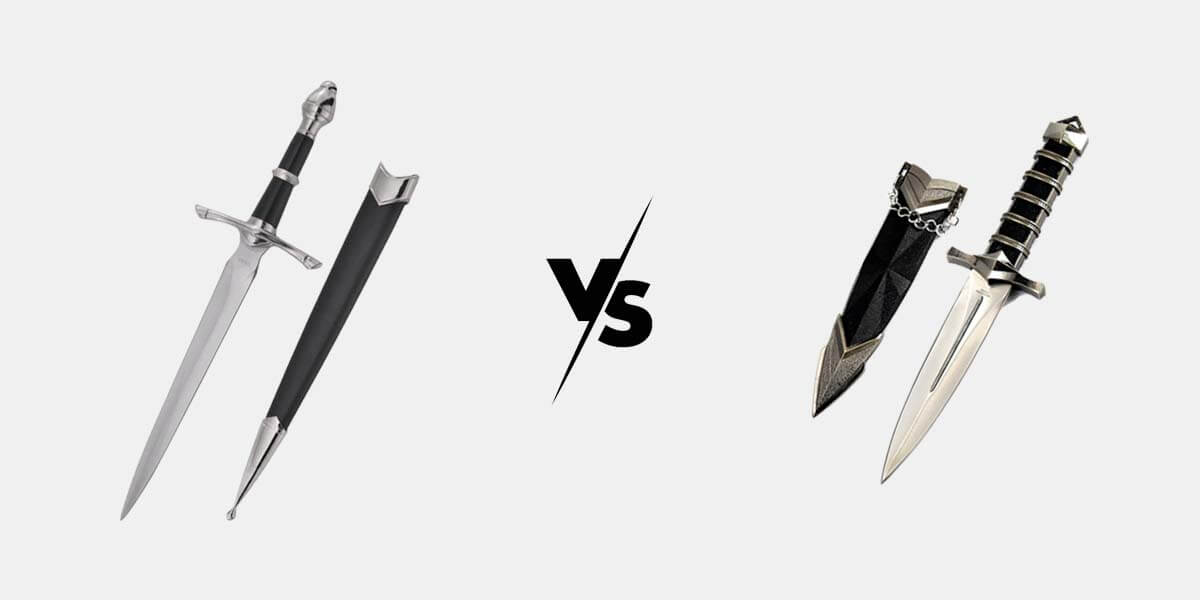 We’re going to take a deep dive into the interesting world of dagger vs knife. You’ll learn about how they are different, where they are similar, and how to choose the one that’s right for you! We’re going to uncover their unique history, show you what features are important to look out for, and where their respective strengths/weaknesses lie.

By the time we’re done here, you’ll have a firm foundation and everything you need to choose which blade is better for your needs and budget. Whether you’re on the market for a capable and intimidating self-defense knife, or you’re looking to add to your knife collection (or boost your kitchen game), our guide is here for you! Let’s get started!

The History of Daggers and Knives

These two categories are often confused in modern times – but this wasn’t always the case. Throughout history, since the creation of knives and metal-based blades, daggers and knives have played an essential role in development and combat. Even after guns were invented, daggers and knives were still carried and used for combat and utility.

While you won’t see many daggers being carried around today, they still do exist. In the past, almost every man had to carry a dagger. Before bronze and iron, the daggers were cut from stone. Today, you’ll find daggers crafted from a wide range of materials – many of which are mainly decorative.

Historically, daggers were used mainly for combat and self-protection, and to a lesser extent utility and general use. In combat, daggers were made primarily for piercing and thrusting through spaces between an enemy soldier’s armor plates. Daggers were seldom used as a warrior’s primary weapon due to their thinner blade and shorter overall size.

They were often carried by the soldier’s side or on their back (accessed over the shoulder or around the side). Daggers excelled up-close-and-personal, where longer swords and spears were too hefty and bulky to be practical. They had a fast and nimble blade that could easily sneak into an enemy’s defensive weak-spots.

As side arms and pistols came into being, daggers were slowly phased out. Nowadays and in recent times, daggers are almost extensively used ceremoniously and decoratively. You can find collector’s daggers and antique models that have jewelry, seals, family crests, and precious gems laid into the dagger.

The history of the knife is quite a bit more humble than the dagger. Knives were crafted from stone and used for building and various tasks. Some stone knives have been unearthed and dated as far back as 500,000 years. This testifies to the raw utility that knives offered early humans, and how important they have been to our development and creativity.

Like daggers, knives have been carried for thousands of years by men and women alike. Knives became exponentially more popular with the adoption of bronze and later on, iron. This allowed them to hold a sharper edge for longer and allowed them to be used for more demanding and intensive cutting tasks.

Although they made for pretty handy defensive blades, knives were carried mainly for tactical and utilitarian tasks. It’s this difference in their purpose that led to significant changes and differences in design and shape between them and daggers. Today, EDC and utility knives are extremely functional and widely used.

You can find them in countless variations and unique designs that can suit almost every need and style. As knives have developed, so have the laws that govern their use and legality. This is why we always recommend you check your local laws before buying a dagger or concealed carry.

Dagger Vs Knife: The Similarities

Now that you know a little about the history and context of these knives, let’s take a quick look at some of the ways they are similar. The main similarity (and often a point for confusion) is that both knives and daggers are designed to be used one-handed. Even larger daggers such as the kukri knives are made to be wielded single-handedly.

This allows the other hand to stay free for grappling, balance, utility, and much more. Knives and daggers will generally have sharp tips. This helps improve functionality and add to the blade’s accuracy and piercing power. Daggers tend to focus more on the tip’s strength and sharpness, whereas knives tend to focus a little more on the cutting edge. In terms of knife balance, both daggers and blades are relatively centrally balanced.

Larger options like the Kukri will be more blade-heavy, but this isn’t a common theme. Stainless steel is widely used in modern knives and daggers. Older antique iron models need some sort of additional coating to resist rusting, but almost all modern options have higher carbon content. Let’s move onto what sets knives and daggers apart in the next section.

Dagger Vs Knife: The Main Differences

We’re going to cover a couple of the main differences between knives and daggers now. From their shape and intended use to the cutting edge, you’ll learn how to tell a dagger and a knife apart with just a glance.

This is the most immediate and easy-to-spot difference. Daggers are longer blades that are designed for piercing and thrusting. They manage to get the maximum blade length with the lowest possible penalty to movement and nimbleness. Daggers will often have a slimmer overall appearance as they need to be as lightweight and mobile as possible.

Knives on the other hand than to have shorter blades that are a little stockier. The overall length is shorter than a dagger and its design favors cutting, slicing, and prying – as opposed to stabbing and thrusting. One other notable feature that most daggers will have is a broad handguard. Handguards will be found where the handle meets the blade.

They’re designed to improve your grip while thrusting forward while keeping your hands safely off the blade. They also protect your finger from being lopped off by a clashing blade that slips downwards and toward the handle.

As we mentioned above, daggers have a longer blade than most knives. The blade also tends to be a little thinner (and narrower) near the tip to enhance its piercing ability. Knife tips tend to be a little more on the sturdy side and avoid the narrow, thin tip in favor of a heftier and stocker one. This improves their ability to pry objects open and enhance the overall practical durability of the knife.

In terms of the cutting edge (there are exceptions), most daggers will have a dual-sided cutting edge. This means that both sides of the blade are sharpened. This dual-edge gradually narrows until they come together to form a sharp tip. The dual-sided cutting edge helps the dagger in different grip positions (such as the downward and reverse grips) and makes it more versatile for defensive use.

Knives usually have single-sided cutting edges. There are exceptions and many outdoor knives will include a serrated cutting potion – either on the blade’s spine or near where the usual cutting edge meets the handle.

Also Read: What is a Dirk Knife – Best Tips for Your Needs

Daggers have a slightly larger and longer handle. This gives them a reliable grip and reduces the chance of the knife slipping out of your hand when defending yourself. The extra weight is offset as a lot of the dagger’s handle gets a little thinner nearer to its base. There’s often a rounded portion (like a ball) near the end to prevent your hand from slipping down the thinner handle profile.

This larger handle gives the dagger more flexibility for alternate grip styles and ambidextrous use. Knives usually have shorter and thicker handles that are better suited to slicing and cutting. Since most knives only have a single cutting edge, you won’t need to worry about adjusting your grip for cutting with the other edge. Dagger vs Knife both have rather central balance points (except the Kukri) and this makes them very intuitive to use.

Daggers are primarily used for self-defense. In modern times, you can find daggers being used for martial arts training and less extensively as EDC defensive options. They can be used for general utility, though the shorter and stockier blade on most knives is better suited for utility tasks.

Daggers are perfect for using in a reverse grip and performing quick, devastating slash and stab movements. Knives are better for general utility tasks like prying open a package, cutting through material, or peeling fruit. Nowadays, daggers are used commonly as ceremonial blades and collectors’ items, whereas EDC knives are used extensively.

So, which knife is right for you? You have all the information and knowledge you need to make that choice now. We’ve covered quite a bit of information, so feel free to have another read if anything is unclear to you. Take what you’ve learned here in our dagger vs knife breakdown, visit some knife shops, and get a practical sense of what we’ve learned here today! Good luck and enjoy some awesome knives!