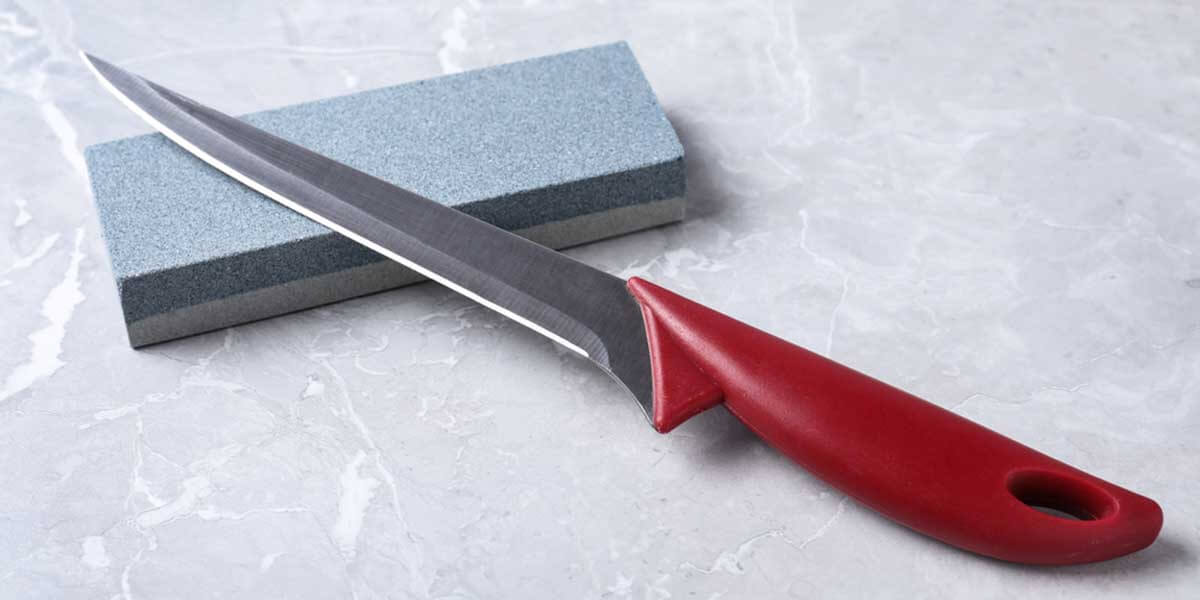 We might all use a fillet knife at some point, but some people use it regularly in their line of work. Fishermen and fish-sellers mainly use fillet knives. Home chefs also use the fillet knife for cooking purposes. First off, the fillet knife is handy for cleaning and cutting fish.

Compared with other varieties of knives, the fillet knife stands tall in perfection when used to dress and prepare fish. To cut your fish effectively, your fillet knife has to be properly sharpened. In this guide, we will give you suitable ways on how to sharpen a fillet knife like a professional.

Use a Sharpening Stone

All you need do is lightly position the base of the knife on top of the sharpening stone. This positioning makes it easy for the knife to glide back and forth, thereby sharpening the knife in the process. If you feel pain while sharpening, you can change the sharpening position and the angle.

Use an Electric Sharpener

Usually, the first phase comes with grinding stones for complete sharpening in the first step. I would advise that during sharpening, do not apply much pressure on the blade. The blades of fillet knives are not strong like regular kitchen knives. The second phase of sharpening, which is the honing phase, is an equally seamless process. All you need to do is pull your fillet knife around 4-5 times.

The Accusharp tool is majorly for fishermen who need an emergency means of sharpening a fillet knife. Just like the above tips to sharpen fillet knife, using this fillet knife sharpener presents no difficulties. To sharpen your knife, place it on a level surface, and ensure the cutting side faces up.

Then, use the v-shaped end of your tool to slide across the blade still facing up. You can repeat this process continuously till you are satisfied with the attained level of sharpness. The beauty of the Accusharp tool is, it is very portable, and you can carry it in your backpack when going fishing.

Use a Sharpening Rod

Using the sharpening rod to sharpen your fillet knife is not as easy as using the electric or sharpening stone method. However, it is still a proficient process, particularly if you are an expert at it. Beginners who want to sharpen their fillet knives are advised not to use this because of its challenges.

The sharpening rod is like a secondary sharpening tool, and it is useful when you need to give your fillet knife a slight polishing. Just like the sharpening stone, you will hold your knife at the same angle and glide back and forth.

Although, it is crucial to glide the knife in the opposite direction towards you. If this is not your first time doing this, you need to exercise extra caution when using a sharpening rod for sharpening a filet knife.

If you want your knife to be as sharp as it was when it was purchased, follow these steps below. 5 tips to keep your fillet knife sharp:

1. Don’t Use a Pocket Sharpener

When you use a pocket sharpener for the wrong purpose, it defeats the true essence. And when it is time to fine-tune your fillet knife, your pocket sharpener might be dysfunctional. If you want to sharpen a dull fillet blade, it is advised to use any of the options mentioned in this guide.

Generally, the blades of regular knives are less flexible than the fillet knives. This implies that if fillet knives are sharpened like regular knives, the sharpness attained would be partial. To sharpen the whole blade with its length inclusive, it is necessary to be methodical about it. The Cheese slice technique is used if you intend to use a sharpening stone to sharpen your fillet knife.

First off, you sprinkle soapy water heavily on the smooth region of your sharpening stone. The reason for this is to function as a lubricant. Then, carefully hold the knife of your fillet blade at an angle of 15-20 degrees on the stone. Next, create long and equal strokes from the blade’s base to the tip. It is a similar concept to cutting a slice of cheese.

For best results, repeat this process 15 times on each side of the blade with a slight pressure. All through this process, maintain the 20-degrees angle every time and avoid stroking backward. If you want to stroke the second side, turn the blade over and ensure the stroke reaches the tip of your blade.

Steeling is essential because it helps to realign the blade’s edge of your fillet knife. During steeling, grip the knife at an angle of 30 to 40 degrees to the rod. Then, stroke the rod using the blade in a seamless motion. Repeat this stroking process on each side of the fillet’s blade 2-3 times.

Shoulders develop when you have been using your fillet knife for a while, and you have sharpened it a few times. The round-edges at the blade’s tips are called shoulders, and they make it impossible for your fillet knife to maintain a straight edge. Some tools are manufactured specially to remove shoulders. However, it can be done with your sharpening stone.

All you need do is flip the stone to the other side. Then, position the blade at 10-15 degrees before you stroke more intensely than you did when sharpening. This method helps you to eliminate the shoulders by making the blade thinner. For best results, repeat this practice several times on each side of the blade.

After you have successfully removed the shoulders, turn the sharpening stone to the smoother side and redo the first step. Next, use your steeling rod to stroke each side of your blades for as long as possible. With this, your fillet knife becomes very sharp, and you can take on as many fishes as possible.

There are other tools on various online stores that you can use to sharpen your blunt fillet knife. The tips to sharpen fillet knife in this piece are self-explanatory and can be done without any supervision. However, if you don’t know how to sharpen a fillet knife yourself, you can reach out to a professional to handle it for you.

One fact you need to know is, the thinness and flexibility of a fillet blade make it more challenging to sharpen than conventional knives. However, if you can go through the painstaking process of sharpening your knife, you will effortlessly tackle any fish.

We use cookies to ensure that we give you the best experience on our website. If you continue to use this site we will assume that you are happy with it.AccepctPrivacy policy