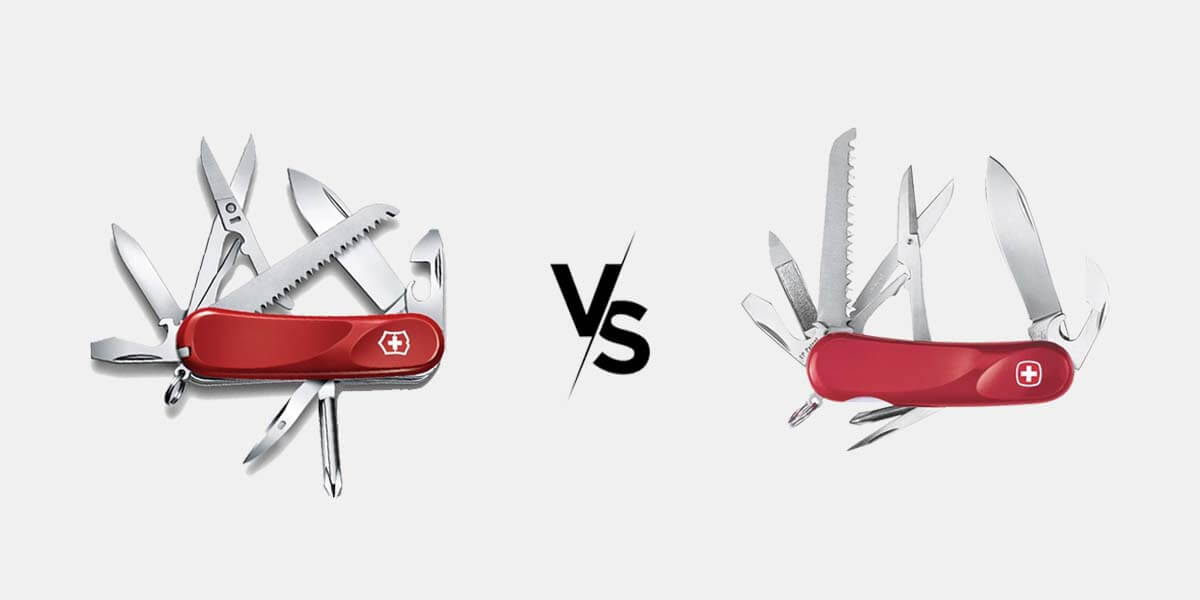 Widely regarded as some of the best Swiss Army knife makers on the market – the Wenger vs Victorinox has been going on a very long time. Both companies have been making knives for over 100 years and have mastered their strengths over time. In 2005, Wenger was acquired by Victorinox.

This wasn’t the end of the Wenger brand by any means as it kept its identity and still produced and sold the same knives it became famous for. This changed in 2013 as the brand Wenger was incorporated into the Victorinox product line as their Delemont range. You’re still getting the proven Wenger design and build quality, but the name has changed.

That being said, it’s still very easy to find their old knives (that don’t fit into the Delemont range) and they’re well worth paying attention to. Now that the brand has officially been absorbed, Wenger knives might become quite popular as collector’s items – especially their outrageous 87-tool 16999 model.

This might be the last time you can get your hands on these knives before they move into the collector’s price range. In this guide, we’ll show you how Victorinox and Wenger’s knives match up. We’ll cover topics like durability, price, build quality, and more.

By the end of the guide, you’ll know which knife is right for your style, budget, and planned uses. You’ll have everything you need to get the perfect Swiss Army knife for your pocket! Let’s get started!

With both Wenger vs Victorinox being held to strict quality control, you can expect top-of-the-line durability from both knives. That being said, there are some minor differences worth noting. Both brands use very similar assembly processes, meaning that there isn’t much to separate them here.

The main difference comes when you consider the number of tools generally used in the knives. Generally speaking, Wenger uses more tools than Victorinox. While this is often an advantage, in terms of durability, it can be a bit of a drawback. More moving parts means more can go wrong.

You’re more likely to rust a tool that you hardly ever use than you would on a knife where you use all the tools frequently. You also have to consider that these tools are heavier, so drops are likely to do more damage. The added size also makes it more prone to scratching and wearing. In practice though, you aren’t going to notice much of the difference between Victorinox vs Wenger.

With a good care and maintenance routine, you’ll negate the gap between the two brands. Customer service used to be a bigger difference, with Wenger offering a 3-year warranty compared to the 2-year one from Victorinox. Now that both product lines are under the same company, they have the same warranty period.

Winner: Victorinox (ever so slightly).

Wenger shines when it comes to versatility. As we’ve already mentioned, Wenger has models like the 16999 that have 87 tools with over 140 functions – and that’s in one Swiss Army knife. There are other brands out there that offer the same number of tools and functions. But very few of them offer the same reliability and build quality as Wenger.

On average, Wenger includes more tools in their knives, and this boosts the versatility. Victorinox tends to take a more standard approach and focus on functionality. Their knives don’t stray too far out in terms of tool types and number of functions. This helps them keep their knives more compact and lightweight, whereas many Wenger knives can get quite heavy.

Wenger makes up for this with the one-stop-shop approach that covers you in more situations – often meaning you don’t need to carry an extra knife. This isn’t to say that Victorinox knives aren’t versatile – because they are. With the standard tool list on Victorinox, you can get a wide range of utility work done with one knife. Wenger just goes above and beyond in this department, and edges in front of Victorinox.

Portability and Ease of Use

As we’ve mentioned, Victorinox knives are generally lighter and more compact than Wenger knives. This is an especially important advantage for Swiss Army knives as their whole design is based around being easy to carry and quickly whip out. If you’re carrying an exceptionally heavy Swiss Knife like the 16999 model, you’re going to run into some problems.

It’s going to be hard and slow to find the right tool (unless you’ve had this knife for a very long time). Other than being slow, it is going to be more noticeable on your belt or in your pocket – and you don’t want a knife that weighs them down too much. You might even struggle to find a suitable sheath for the larger Swiss Army knives, leaving them susceptible to scratching and other damage.

With Victorinox’s more standard knives, you get a lightweight and compact knife that isn’t as versatile as Wenger’s options, but they’re incredibly capable. This lightweight build means you have more carrying options as they won’t weigh your pocket down at work. Having fewer tools is great for accessibility and ease of use.

You can easily get the tool you need and muscle memory builds quicker than it does with a wide variety of tools. When talking about ease of use, it’s important to look at the tools folding and opening response. Victorinox is excellent in this regard! You’ll find that some of the older Wenger options can be quite a mission to quickly open and close the tools.

The motion isn’t as smooth and consistent and equivalent Victorinox knives. Luckily, now that Wenger has been absorbed by Victorinox, knives in the current range are easier and smoother to open. This smoothness ages well and you don’t need to worry about your hand (or the tool) slipping.

Also Read: Best Edc Knives – The Most Popular on the Market

There are a couple of different features you need to think about when you compare build quality, as durability only tells one part of the story. Build and design quality links in closely with ease of use, functionality, and performance. Let’s take a look at how Wenger vs Victorinox blades compare in terms of edge retention and cutting power.

Due to similar steel quality and craftsmanship, there isn’t a whole lot to separate these two brands. There’s even less of a difference now that Wenger has been incorporated as a Victorinox product line. In my experience, I’ve found Victorinox knives to come a little sharper right out the box. You can sharpen them to a very sharp edge quite easily.

On the other hand, Wenger knives tend to have slightly better edge retention, at the price of being harder to sharpen and not getting quite as sharp as Victorinox knives. In practice, you won’t notice much of a difference in cutting power or edge durability. Both brands use the same (or very similar) steel with identical hardness ratings.

If you’re obsessed with having the sharpest possible cutting edge on your Swiss Army knife at all times – then you might want to side with Victorinox. If you’re happy to sacrifice a tiny bit of cutting power and performance in exchange for slightly better edge retention. Then you’re probably better suited with Wenger.

You won’t need to touch your blades up quite as often. This hasn’t always been a big deal for me, as I enjoy cleaning, sharpening, and maintaining my knives – though, if you’re an on-the-go type of person, then low-maintenance knives are often a slightly better choice!

Price and Value for Money

When it comes to value for money, it’s quite hard to be objective. Great value for money means different things to different people. With that said though, there are some things worth pointing out about each of these fantastic Swiss Army knife makers.

I’m the type of person that enjoys a simplistic and minimalistic Swiss Army knife. I find that the more tools I have, the less I get good use from the knife – usually. I’ll end up relying on the core (standard) tools and ignore the rest.

If you’re anything like me and prefer your knives to be lightweight, simple, and to leave off all the extra “fluff”, then you’re more likely to see Victorinox knives as having better value for money. If you expect your Swiss Army knife to be a versatile workhorse. That can cover you in a huge range of different situations, Wenger might have what you’re looking for.

From their monstrous 16999 model to ones that aren’t quite as large. You’ll find that the “cost per tool” of Wenger knives is lower than Victorinox. They’ll generally be heavier and larger, but this probably isn’t your main concern if you’re looking for versatility!

You should have quite a clear picture of how these two impressive Swiss Army knife makers hold up against each other. Take any experience you have with these knives, along with everything you learned in this Wenger vs Victorinox comparison and you’ll have everything you need to make an excellent choice!

Just bear in mind that the current product isn’t as different from Victorinox as they used to be – the lines between them are blurring. Hopefully, you’ll find the perfect knife that exceeds all your expectations! Good luck!